Curtailing energy consumption has always been one of the biggest challenges for the effective and efficient working of a network. This is primarily because sensor batteries cannot be recharged even with power restrictions. To reduce consumed power, it is best to adopt the clustering model in WSNs or wireless sensor networks, during data transmission to Base Station or BS. Network lifetime can be prolonged while an intelligent clustering protocol reduces the consumption of energy. In this protocol, clustering is achieved with dynamic clusters and then assigning relevant cluster heads using an altered genetic algorithm.

The Modified TDMA schedule resolves the issue of large amounts of energy drainage as a result of small number of nodes when compared to larger nodes that have higher frequencies of data transmission in a steady state phase. Four steps are considered to resolve energy consumption in wireless sensor networks issue:

As a result, the cluster heads will receive the same amount of data from all its nodes, while they drain the same amount of energy .Nodes energy levels can be affected as they go into listening mode, which is efficiently avoided with this method. This process clearly shows the energy consumption in wireless sensor networks.

Evaluating Energy Consumptions in a WSN

Finding the energy utilization of network protocols simulated the energy structure of network node components against the node energy structure. Besides analyzing the energy consumption of WSNs, it also evaluates communication protocols to construct WSN Applications after the deployment of nodes. Different internal and external events are triggered to enable the node modules to perform their state transitions and tasks. Event triggers can be due to the sensor module, processor module and the transceiver energy module. The evaluation process shows Energy consumption in wireless sensor networks

With the enhancement of routing procedures in the Modified LEACH or Low Energy Adaptive Clustering Hierarchy protocol for WSN, select the appropriate head node for each cluster, first. Thereafter modify the election threshold for the cluster node. Alternatively, some sensor node processes that send more data packets than other nodes in the entire network can be avoided. This proposed method is clearly showing energy consumption in wireless sensor networks 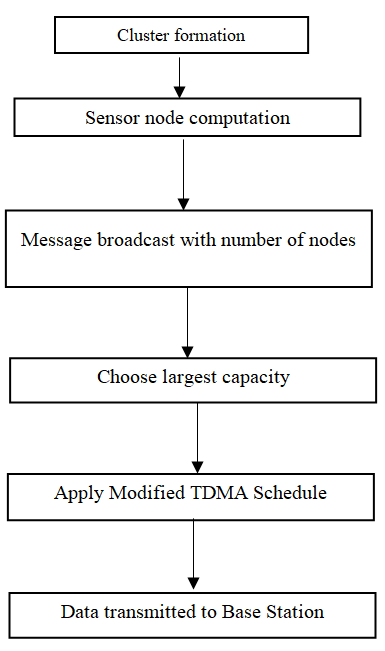